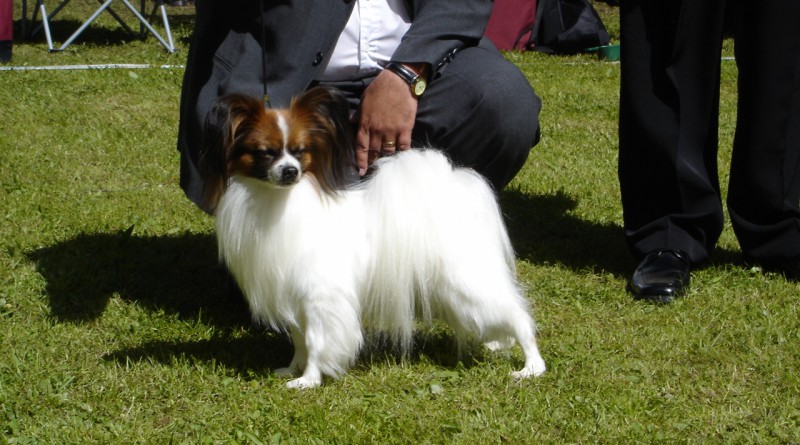 This year has so far been the best year ever for Kennel Caratoots. I am the proud owner of both the Top Winning Bitch 2007 and the Top Winning Dog 2007 in Sweden. Out of the 20 Top Winning Papillons of Sweden 2007, seven belong to me. I am now the No 1 Top Winning Breeder of Papillons in Sweden for the third year in a row. During the year my dogs have achieved eighteen BOB and sixteen BOS. In total they been awarded twenty-four CAC, sixteen CACIB, eight R-CACIB and eleven new champion titles. Ch Caratoots Classic Commander was awarded the title Swedish Winner 2007 at the SKK International Dog Show in Österbybruk, and Ch Caratoots Classic Confidence the title Nordic Winner 2007 at the SKK International Dog Show in Stockholm (beating 91 papillons!).

Ch Caratoots Classic Commander has really fulfilled my expectations and hopes for this year. He became the No 1 Top Winning Papillon of Sweden, Swedish Winner 2007, got his Finnish and International Championship titles, was placed twenty times, won nine BOB, two BOS, one CAC, six CACIB, two R-CACIB. At the SKK International Dog Show in Ronneby he was awarded BIG-1 and BIS-2.

Ch Caratoots Classic Confidence became the No 1 Top Winning Bitch and Nordic Winner 2007. She was placed seventeen times, won four BOB, eight BOS, one CAC, six CACIB, one R-CACIB. At the Finnish Kennel Club International Dog Show in Eckerö she received her Finnish and International Championship. She was also five times awarded Best Progeny Class, one of them even BIS-1.

Ch Caratoots Convince Chantalle, my grand old lady of fourteen years of age, became No 2 Top Winning Veteran once again with ten BOB Veteran, one BOS Veteran, one BIS-3 Veteran and BISS at the Papillon Specialty. She was also placed nine times during the year, despite her age – not bad I’d say! Ch Caratoots Complete Charisma has not been attending the show rings that much this year, but when she has been shown she has done quite well with three placings and one CACIB.

Ch Caratoots Crème de Cacao, living with Shay and Joe Pask Van in Texas USA, did really well in the American show rings and got her American Championship title in September.

In April Ch Pearl Collection Pärlemo got the final CAC’s she needed for her titles, and became Swedish, Finnish, Danish, Norwegian and Nordic Champion. She was placed nine times, got two CAC, one CACIB and three R-CACIB.

Caratoots Center Court was sold to Telse Daetz Beck in Denmark in 2006. Telse has done a great job with him, showing him to a No 5 Top Winning Dog of Denmark 2007 position. With several BOB Puppy awards, three placings and two CAC, he is heading for his Danish Championship.