Small de luxe Toy spaniel, of a normal and harmonious build, with long hair, moderately long muzzle shorter than the skull, lively personality, graceful yet robust, proud carriage with an easy and elegant gait. His body is somewhat longer than high. 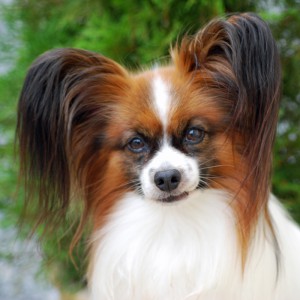 In normal proportion to the body and proportionately lighter and shorter than in the Spaniel of large or medium size.

Skull: Not too rounded neither in profile nor from the front, sometimes showing a slight trace of medial furrow.
Stop: Depression sufficiently accentuate. In the heavier dogs, this depression is less evident yet still defined; in the very small dogs it is clearly marked without ever showing sudden break.

Nose: Small, black and round, but slightly flattened on top.
Muzzle: Shorter than the skull, fine, pointed and not too hollow on the sides; must not be turned up.
Nasal bridge : Straight.
Lips: Strongly pigmented, thin and tight.
Jaws/Teeth : Quite strong, closing well and normally.
Tongue: Must not be visible; the fact that it is constantly visible or not drawn in when touched by the finger is a fault.
Eyes: Rather large, well open, in the shape of a large almond, not prominent, set rather low in the head, the inner corner is at the intersection of the skull and the muzzle. Dark in colour and very expressive; eyelid strongly pigmented.
Ears: Quite fine but firm. Whether it is the oblique ear or the hanging ear, when examined by hand, the cartilage must not end in too sharp a point. The ears are set on rather far back on the head, sufficiently apart one from the other, so as to reveal the slightly rounded shape of the skull.
a) Variety with hanging ears, called Phalène; The ear at rest is set high, considerably higher than the eye line, carried hanging and yet quite mobile. Garnished with wavy hair which may reach quite a length which gives the dog a pretty appearance.
b) Variety with erect ears, called Papillon; The ear is set on high, the auricle (external ear) well open and turned to the side; the inner edge of the auricle forming an angle of approx. 45° with the horizontal. In no case must the ear point upwards, which would be like a Spitz type ear and must definitely be rejected. The inside of the auricle is covered with fine hairs, also wavy. The longest hairs extending slightly beyond the edge of the ear; the outer face, on the contrary, is covered with long hair forming hanging fringes extending well beyond the edges of the ear. Cross-breeding of the two varieties often produces semi-erect ears, with drooping tip; this mixed form of ear carriage is a serious fault.

Of moderate length, a little arched at the nape.

Topline: Neither too short or arched, nor saddled, without however being flat.
Loin: Solid and slightly arched.
Chest: Wide, fairly well let down. The circumference of the thorax taken between the past two ribs must be approximately equivalent to the height at the withers. Ribs well arched.
Belly: Slightly drawn up.

Set quite high, rather long, abundant fringe forming a lovely plume. When the dog is in action, it is carried raised along the line of the back and curved, the extreme tip may touch the back; never should it curl or lie flat on the back.

Legs straight, firm, fine. The dog must not seem to be raised up; seen either from the front or from back, the legs are parallel.

Rather long, called « hare feet » resting evenly on their pads. Strong nails, preferably black, lighter in the dogs with brown or white coats (the white nails in white dogs or in dogs with white legs do not constitute a fault if the dog is otherwise well pigmented). The toes are strong with a tough pad, well furnished in between with fine hair extending beyond the tip of the foot and forming a point.

The coat, without undercoat, is abundant, glossy, wavy (not to be confused with curly), not soft but slightly resistant to the touch, with silky reflections. The hairs are inserted flat; they are quite fine, slightly curved by the wave. The appearance of the coat is similar to that of the English Toy Spaniels, but it differs definitely from that of the Pekingese Spaniel; at the same time it should not have any resemblance to the coat of the Spitz. The hair is short on the face, the muzzle, the front of the legs and the underneath part of the hock. Of medium length on the body, it gets longer on the neck to form a ruff and jabot, descending in waves on the chest; forming fringes at the ears and at the back of the forelegs; at the back of the thighs, an ample culotte with soft hair. There may be small tufts of hair between the toes and may even extend slightly beyond providing they do not give a heavy appearance to the foot, but rather give it a finer appearance by lengthening it. Certain dogs in good coat condition have hair 7,5 cm long at the withers and fringes of 15 cm on the tail.

All colours are admitted on a coat with a white background. On the body and legs, the white must be dominant in relation to the colour. The white on the head preferably extended by a more or less wide blaze. A white marking is admitted on the lower part of the head, but dominant white on the head constitutes a fault. In all cases, the lips, the eyelids and principally the nose must be pigmented.

Any departure from the foregoing points should be considered a fault and the seriousness with which the fault should be regarded should be in exact proportion to its degree and its effect upon the health and welfare of the dog.