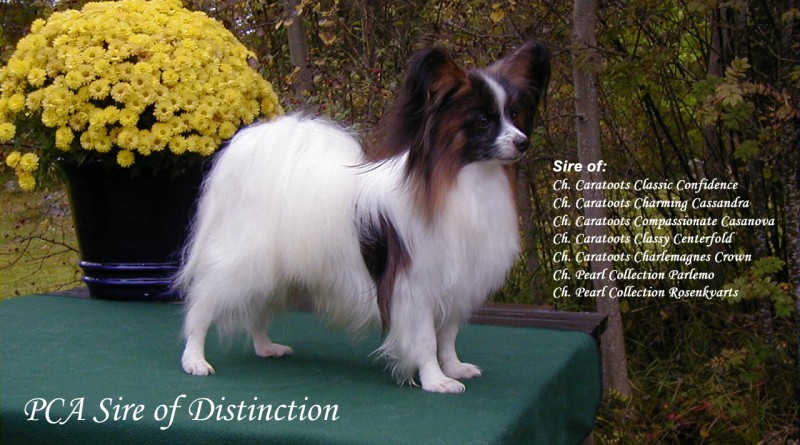 It is with great pride and pleasure we announce that Ch. Caratoots Captain Courageous (‘Anton’) has qualified for the prestigious Papillon Club of America Sire of Destincion Award.

The prerequisite for qualifying for this award is that the dog has sired 13 dogs that have American Kennel Club titles, out of which 7 American Kennel Club conformation Champion titles. In the case of ‘Anton’, he has sired 13 American conformation Champions, and one must not forget that he has also sired offspring outside the United States of America that has achieved great titles. For instance, ‘Anton’ is the sire of:

As far as we know, this is only the second Swedish papillon ever that has qualified for this prestigous American award.

‘Anton’ has been back to us in Sweden two times, to contribute to our breeding in Kennel Caratoots and compete in the showrings. As you can see on our website, he has made an remarkable mark in our breeding program giving us multi-titled offspring today living either in the USA (Multi Ch. Caratoots Classy Centerfold, Ch. Charlemagnes Crown and Ch. Caratoots Compassionate Casanova) or in Sweden (see above).

We are extremely grateful to Mrs Karen Byrd, who has taken such good care of ‘Anton’, used him skillfully in her breeding program and together with her outstanding handler Mr Hiram Stewart shown many of his offspring to their titles and thereby qualifying him for this award.

‘Anton’ is not only a beautiful, mentally and physically sound dog himself, but has also produced these qualities with bitches from a wide variety of other breeding programs. In other words a dog to be proud of!

Thanks Karen for all the efforts!